I wandered, sailed, hiked and backpacked around the Pacific Northwest before coming to New England. Up in Maine I found a small British built cutter and renamed it TATOOSH. In the Chinook language of the Northwest, Tatoosh is the name of the Thunderbird. The legendary home of this mythological creature is Tatoosh Island which is just offshore of Cape Flattery on the Washington coast - the northwestern most point of the contiguous United States.

Now there is PEREGRINA.

PEREGRINA is Spanish for "pilgrim" or "the wanderer" and we expect she will live up to her new name!

Please take a look at our new website The Peregrine Sea

My friend Webb Chiles has finished his fifth circumnavigation and now divides his time between a condo in Chicago and The HAWKE of Tounela currently in New Zealand. 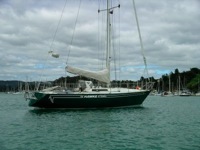 Legends of the Thunderbird
from the Quillayute and Hoh tribes

S.V. TATOOSH
- and her Refit

Exploits of the
Steam Tug Tatoosh